Committing treason, more akin to blasphemy, as they were citizens of a nation still influenced by decades of a belief in ‘divine right’ did not come easily to the Founding Fathers. This belief that kings were appointed by God was waning by 1763 when the British, as a result of really poor management, raised taxes in the colonies resulting in the American Revolution which helped to put an end to divine right altogether.
The Founding Fathers are often referred to as a mono-cultural group, but they were hardly that. The regional, religious, political, and historical diversity of the group that represented 13 distinct governments reviewed and debated 90 declarations before establishing the “Committee of 5” to write what became the Declaration of Independence. The Committee in turn, gave the job to Thomas Jefferson who submitted the first draft on June 28, 1776. After a few days of debate and modification the final document was signed on the Fourth of July, 1776. (This date has been contested by historians, but an almost-final draft of the document was printed and posted on July Fourth.)
The authors and signers of the Declaration of Independence had to agree to disagree if they were to gain their freedom from tyranny. They had to debate deep philosophical and political differences and stay in that room during a sweltering Philadelphia summer until they truly represented unitedstates. The Continental Congress had found enough strongly shared common interests and beliefs to sever their ties to their homeland forever. 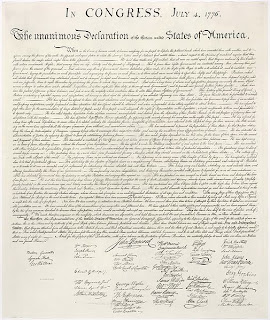 The Declaration of Independence Has Six Sections
The Introduction: Which begins “When in the Course of human events, it becomes necessary for one people to dissolve the political bands which have connected them with another,”
The Preamble: Another incredible beginning: “We hold these truths to be self-evident, that all men are created equal, that they are endowed by their Creator with certain unalienable Rights, that among these are Life, Liberty and the pursuit of Happiness.”
The Indictment: An outline of the offenses the authors claim were committed by the King of England, including “For imposing Taxes on us without our Consent:”
The Denunciation: The justification for the declaration, “Nor have we been wanting in attentions to our British brethren. We have warned them from time to time of attempts by their legislature to extend an unwarrantable jurisdiction over us.:”
The Conclusion: Establishes “That these united Colonies are, and of Right ought to be Free and Independent States; that they are Absolved from all Allegiance to the British Crown, and that all political connection between them and the State of Great Britain, is and ought to be totally dissolved;.”
The Signatures: This evidence makes it impossible for the 56 signers to deny their commitment to the content of the document.
An Evolving Inclusion Strategic Plan!

Great Britain they had to make themselves independent in fact. It took another 13 years before George Washington was inaugurated. The fact that the document signed in 1776 excluded the majority of the people under its jurisdiction does not diminish its impact. As we evolved as a nation the words of The Declaration of Independence were used to argue for the enfranchisement of all U.S. Citizens. 87 years dragged on before slavery was abolished. Another 3 years elapsed before former male slaves gained the right to vote. 54 more years passed before women who were U.S. Citizens acquired the right to vote. The powerful words contained in this document are used to assert the rights of people all over the world and act as a catalyst for defending freedom, representation and democracy everywhere.