The crisp days of late summer conjure up memories of heading back to school with brand new composition notebooks, protractors, and pencils!  In New York City we returned to school a few days after the Labor Day weekend.  During the first week of school thousands of children across the country have written essays about what they learned during their summer vacation.

This summer marked the 50th Anniversary of the Civil Rights’ Movements’ March on Freedom and the 94th Anniversary of Women’s Suffrage in the United States.  And yet, what we apparently need to re-learn comes from the headlines which are rife with examples of inequality based on race and gender.

These disturbing events belie the fact that everyone who is reading this blog post was taught that hateful and violent behavior is wrong long before any of you entered kindergarten. 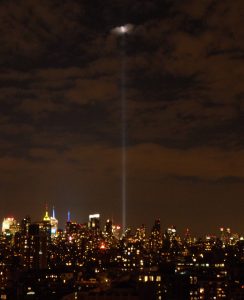 From United  to Divided

Tomorrow marks the 13th anniversary of the attacks by al-Qaeda on the United States.  Reflection of this sad occasion reminds me how the tragic events of that day initially brought Americans together – despite our differences. We have since experienced the gradual deterioration of that unity and increased polarization of our nation. Haters have successfully divided Americans by denying certain Americans equality, based on who they are or where they are from.

The Roman Catholic Pope Francis sent a Tweet on April 28 with the following message: “Inequality is the root of social evil.”

The International Museum of Women recently had an exhibition entitled “What Equality Means to me.” I think about the word equality on a daily basis.  I think about how, although we have made progress in many areas as a nation, true equality still does not exist.

I came up with the following:

Equality is: Access to a thriving life, regardless of who you are or where you are from.

So … What Have We Learned This Summer?

1.    Haters will continue to use hateful language and to do hateful things until and unless they are held accountable, regardless of their job title, bank balance or role in society.
2.    People who are not part of a community should not be ‘in charge’ of a community, as this creates and reinforces an ‘us versus them’ culture.
3.    When enough people stand up and speak out against hate, the hateful behavior stops.
4.    More needs to be done.

We can learn how to relate to one another through facilitated sessions that are not designed to make anyone feel guilty or privileged, but rather to help all participants to understand the things that keep us separated. We can create openings to real relationships by providing a safe space where people can share their stories, concerns, and fears.  Healing can begin and change can happen if we work strategically and intentionally.

I propose that we avoid buzz words and clichés and speak directly and clearly to one another.  I propose, that on this day of mourning and reflection we imagine a country where we can share our common denominators and band together to fight haters –  whether inside or outside of our borders.

Can you imagine this?  If not, isn’t it time to start the new school year by being ready to learn?