This week commemorates two anniversaries: August 26, 1920 the day that the 19th Amendment to the U.S. Constitution was ratified granting women suffrage or the right to vote and August 28, 1963 when more than 200,000 people convened the March on Washington for Jobs and Freedom.
Commemoration is the act of co-remembering, to publicly share and memorialize some historic event. As a student of history, I love commemorations and the many ways that they influence the present and subsequently, our perceptions of the past. 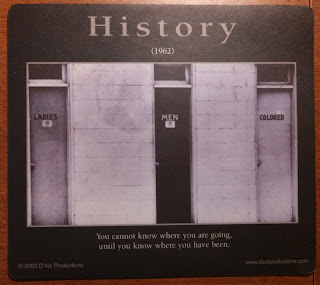 My mouse pad, a gift that a friend brought me from the National Civil Rights Museum in Memphis, has “History” (1962) written across the top and a photo depicting three doors. The first door has the word “Women” on it, the second door has the word “Men” on it and third door has the word “Colored” on it. Under the photo is the caption: “You cannot know where you are going, until you know where you have been.”
I love this mouse pad! Every day it reminds me why I do the work that I do. Every day it reminds me of Emma Lazarus’ words: “Until we are all free, we are none of us free.” Ms. Lazarus, the poet famous for “The New Colossus” which is etched at the base of the Statue of Liberty was born in New York City but was never able to vote because of her gender.
A Lifetime of Voting
My mother was born eight years after women earned the right to vote in the U.S. and brought me to the voting booth for as far back as I can remember. I remember being in the booth with her, fascinated as she clicked the levers and finally slid the metal bar across that registered her vote and opened the curtain. The Wizard of Oz had nothing on her! I remember entertaining myself while she volunteered at the polls. I remember registering to vote immediately after my eighteenth birthday and counting the months that I had to wait for the first election that I would vote in. It was the 1976 Presidential election and being the nation’s bicentennial made it all even more exciting.
The Women’s Suffrage movement was launched officially in 1848 at a convention in Seneca Falls, NY, where Frederick Douglass, the only African American to attend the event, gave an inspirational pro-vote speech. (There were many women present who were anti-suffrage.) In 1851 at the Women’s Convention in Akron, OH, Sojourner Truth, another former slave delivered her famous “Ain’t I a Woman?” speech which poignantly argues for women’s equality. The women’s suffrage movement had its up and downs over its 72 year span including some deplorably racist tenets held by Susan B. Anthony and others. One might argue that white women competing against African American men for the vote exemplified a successful campaign to ‘divide and conquer’, but it was not and is not that simple. There were some lighter moments as well such as when Alice Duer Miller turned the tables in 1915:
Why We Don’t Want Men to Vote 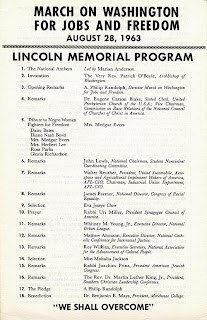 March On!
Yesterday marked the 50th Anniversary of the Great March on Washington. In 1963 I watched the historic event on television, awe struck by the vast range of humanity out en masse. The words of hope and inspiration from one speaker and performer after another were incredible, even to a little 5 year old girl. I did not understand the significance of the event nor how it would impact our world, but the message – We all deserve to be free and to be able to make a decent living wage – made its way from the Lincoln Memorial to our living room and has been motivating me ever since.
What is your story?
History – our story – is comprised of people who make a difference every day by marching, walking, talking, sharing, teaching and remembering! How have these historic events affected you and those you love? What is your story? How may we commemorate it?
Onward!
~ Wendy